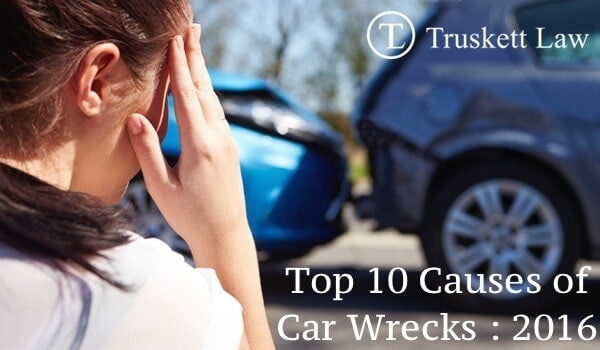 The year is coming to a close – 2017 is here and many changes are sure to be in store. However, a growing number of car wrecks is something that unfortunately seems to stay constant throughout the years.

Each year holds its own statistics and with advances in technology and changes in laws, the causes for wrecks are constantly shifting. It’s important for drivers to be aware of the most common causes of crashes. A knowledge of these causes can help drivers avoid dangerous situations and create safer roads.

According to The Association for Safe International Road Travel, more than 37,000 individuals will lose their lives in car wrecks in the United States each and every year. In addition to that, it is estimated that almost 2 million others will be injured or become disabled as a result of a car crash.

According to a statistical projection from National Highway Traffic Safety Administration (NHTSA), motor vehicle traffic fatalities rose 10.4 percent in the first half of 2016 compared with a year ago.

Here are the top causes of car accidents in 2016:

Many of these causes can be easily avoided by slowing down and obeying traffic laws. Car wrecks affect so many more people than just the driver, so it is important to be aware and careful on the road. Take time to educate yourself on common car crash causes and drive safe in 2017!