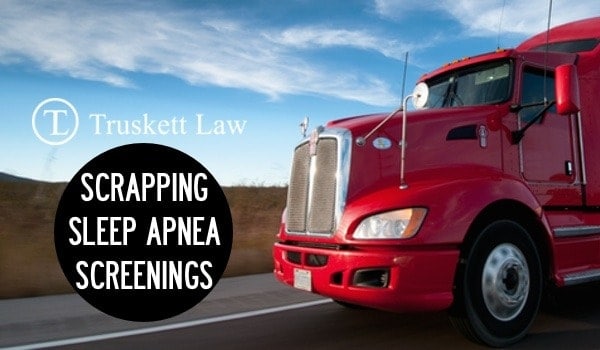 The Trump administration is making a controversial decision to scrap Obama-era plans that require all truck, train, and bus operators to be screened for sleep apnea.

Sleep Apnea: a common disorder in which you have one or more pauses in breathing or shallow breaths while you sleep.

Sleep apnea usually is a chronic condition that disrupts your sleep. When your breathing pauses or becomes shallow, you’ll often move out of deep sleep and into light sleep.

As a result, the quality of your sleep is poor, which makes you tired during the day. Sleep apnea is a leading cause of excessive daytime sleepiness.

The elimination of the rule, part of the White House’s push to slash federal regulations, has reignited a debate over how to balance safety concerns with regulatory relief.

Safety advocates warn that killing the proposal could put lives at risk at a time when traffic deaths are already climbing at historic rates. Fatalities in large truck crashes have increased by 20 percent since 2009.

The latest safety efforts for sleep apnea awareness came in the wake of reports of a New Jersey Transit train crash. The train slammed into a crowded station platform and killed one woman. The conductor had severe sleep apnea but wasn’t diagnosed until one month after the crash.

The incident was just the latest example of an untreated sleep disorder being a factor in a fatal crash. The condition has also been linked to a 2013 Metro-North derailment in New York and a deadly 2000 tractor-trailer crash in Tennessee.

While airplane pilots with sleep apnea can’t even fly until they have been fully treated for the condition, it wasn’t until the Obama administration that formal federal mandates were in the works to ensure those operating planes, rails, buses, and trucks were properly screened.

The FRA and the Federal Motor Carrier Safety Administration announced last week, however, that they would be abandoning plans to require sleep apnea screening and treatment for all rail and truck operators.

Safety advocates argue that there is no enforcement mechanism or recourse if a company chooses not to screen and treat its employees for the condition.

Future of Other Safety Rules

The reversal is ratcheting up concern that other safety rules could get caught in the crosshairs of President Trump’s effort to reduce regulations.

The White House put out an executive order in January requiring agencies to revoke two regulations for every new rule they want to issue, with exceptions for emergencies and national security.

Some rules in the pipeline that safety advocates worry could now be on the chopping block include a proposal requiring electronic speed limiters for large trucks and buses and a plan requiring all future vehicles to have safety signaling and communication technology.